Time to get back into blogging

It's been a year or so since the last post, not counting aloombabroad.blogspot.co.uk which accounted for my whereabouts for half of 2015. If you haven't already read it, take a look now.

So what have I been up to I hear you ask? Well, I've been writing non-stop which is pretty much my life. I've entered lots of competitions for writing and had lots of rejections - story of my life!

But I keep going. 'Never give up,' that's my motto.

Anyway, this time, I'm going to share a piece I wrote for a short play competition that was hosted through the BBC writers room. Little Pieces of Gold were hosting a competition for a 10 minute stage play about second chances. The project was called 'Never Too Late Too Dream', and each writer had to focus on a social, political or religious message surround a second chance.

After sitting and thinking for a while, I started to jot down ideas. Some crazy and far out there, others simplistic and basic in their story but exciting enough to pursue. The key is having a topic that can grip an audience whilst trying to see a way past the problem. It sounds a lot easier than it is.

I settled on a social message and focused on social media as the theme. Social media is becoming a demon in the sense that people live their lives by it. If they're not updating their status about have a cup of tea, they're uploading pictures of their dinner (yes, I've done it too).

Anyway, my story was about Jasper and Tammie, housemates and old secondary school best friends. Jasper is a laid back, refined kind of guy who has no desire to put himself out of his comfort zone. He does what he wants, when he wants. Tammie on the other hand is a social media nut. She is always online, updating her status and photo albums. But now it has come to a point where it is unhealthy and affecting her chances of a happy future.

The story unfolds with the history of Tammie's ex boyfriend, a pawn shop and a helium balloon. It's kind of quirky but I liked it.

But it didn't get put forward and that's OK. It's all part of learning and building the craft, or so they tell me.

Anyway, I've just left my job and my girlfriend has moved back to her native, Ireland. I'm pursuing a career in writing, full steam ahead but finding it tough. But I'll refer you back to my motto above. 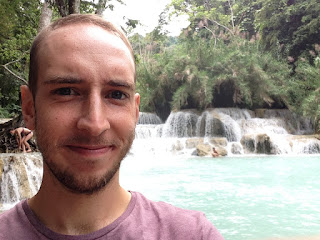 Ah, I wish I was back out there. Kuang Si waterfalls nr Luang Prabang.

So it's been over a month since I returned home for Emmy's christening. Since then, we've had Christmas, Boxing Day a.k.a Nanna's birthday, New Year and play days with Emmy. But somehow, I feel down.

I've heard of the post travel blues before but I thought it was just a think people experienced when they realised they had to settle down or get a steady job. I'm off for at least a year in September but as I was telling my mum the other night, 'it's great to see all the family, but everyone seems to be doing their own thing and I'm not.'

OK, so I'm currently job hunting but I just want to pack up my stuff again, sling the bag over my back and go. I suppose I'll just have to be patient.

So, in my writing arena I have had a busy day today. Aside from plotting my new book set in London - I'm heading up to The Smoke next week for a walkabout in their footsteps - I have applied to be a writer with GoAbroad - a travel company who provide articles, listicles (a list based article) and general travel advice to new and upcoming travellers as well as old hats.

I've submitted my application and hope it comes to something.

I'm also starting up a new YouTube channel to showcase some of my work so I'll post details once it is ready.

Still waiting to hear back from the BBC but it shouldn't be too long now!

Lots going on at the moment and loving it. 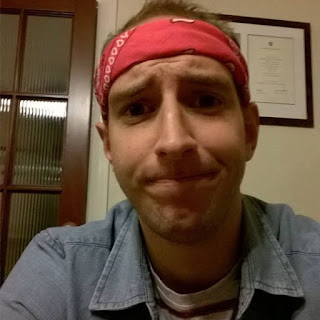 New Year, but still an idiot (however, Karate Kid is a classic).

So I'm home from travelling now and have been so for the last few weeks. What an incredible six months of my life. China, Vietnam (my favourite), Cambodia, Laos, Thailand, Malaysia and Singapore were simply unforgettable and I can't wait to get going on my Australian adventure in September.

Since then, I've had my niece's christening, Christmas, Boxing Day a.k.a Nanna's birthday, play days with my niece and New Year. What a way to come back into this freezing place.

Until I go to Australia though, I'm home, with little money, trying to find temp work and working on new book ideas. And I've come up with an absolute cracker to begin the New Year - which is carrying on the festivities from Christmas (because we had crackers then too).

Whilst I've been away, I completed work on one novel - second draft - and finished all six episodes of my sitcom. In addition, I'm waiting for feedback from the BBC regarding a drama I sent to one of their writers' rooms so I'm on edge everytime an email or phone call comes through.

This new book is set in London and is focusing on the lives of Henry and Flora. But that's all I can reveal because I don't want to spoil it. I'll update accordingly as I go.

I've done all the storyline plotting, all the character mapping, had my friend, @jadicusxo (you can find this fashionista on Instagram or Twitter) helping me with the outfits they are going to wear - thanks Jadicus - and now I just need to take a day trip to London to walk in their footsteps and lose myself in their world and surroundings.

Taking some time out

Sorry I haven't posted since April but I've been busy organising my travels around Asia.

Now I'm on the edge of something amazing, heading off to Beijing to begin my huge trip on Wednesday, but I'd really love for you to stay up to date with me on my travels so check out my latest blog, A Leaf Out Of My Book: Abroad to see how I'm getting on.

As always, thanks for your support and I look forward to you leaving me a message on my new blog.

A Stroll, Some Cards, A Flutter, Some Words... All In A Day's Work For A Writer

I've walked 10 miles on a round trip to see my niece this morning and then come home to lose on the Grand National, draw with my nanna at cards and then progress my second book in my latest romance novels by 5,460 words (it doesn't sound much, but believe me it is!)

So I went out for a walk, partly as preparation for my 100km walk in May for Demelza Hospice for Children but also so I could visit my little two week, almost three week old niece, Emmy. Boy, is she a cutie. Upon picking her up and holding her squarely in front of me, (supporting her head of course before you reel away in horror) little Emmy opts to sneeze not once, but twice in my face. Safe to say, I was not terribly pleased but then I saw what I swear was a smile and it made me laugh at the situation. She is amazing.

When I reached home, Nanna and I had a game of Five Crowns (if you haven't heard of it, Google it! It's amazing.) After breaking out into a four - one lead and with just three games remaining, Nanna in true form pegged me back to four - four and subjected me to one of her laughs that tells you, you've been bamboozled again!

We watched The Grand National and I didn't get a winner. It was genuinely sad to see some of the horses fall, reminding me that I don't really like the sport because I don't think it is a sport. It's cruel. Next year maybe a boycott for me!

Following The National, I moved into my fortress of solitude, aka my bedroom, and began work on editing the final parts of episode 4 of the sitcom before proceeding to book two of my four part book series, based in New York. I'm really enjoying this project and hope to have it published soon. It's in-depth, heart-warming, funny at times but also quite sad - don't worry, I think the sad is heavily outweighed by the rest of the descriptors mentioned above. Today I wrote 5,460 words and as I said, it doesn't sound like much but it is when you go over it and re-write it seven or eight times. After a while, you feel as though you are there on the sofa with them, discussing the life you have created as if it was you own (but that's a good thing, right?)
Anyway, its been a long day so I'm going to hit the deck.

Getting Ready to Wander the Globe!

So today is the big step towards backpacking.

I went to the Chinese Embassy. They've taken my passport for the next fortnight (I hope) and I wait patiently to see if they'll permit me a visa. I know people say, 'You'll be fine, no worries,' and I nod my head contently, pretending they know what they're talking about when they have never applied for one, but these things can still go wrong. Today alone, I have seen two separate applicants coming away from a visa agent, almost in tears.

Anyhow, I'm optimistic and the countdown until I leave for Beijing is well and truly on!

One thing that did get me through was Alice Peterson's Ten Years On novel. Definitely worth a read!

Tomorrow, I'm off to Ashford to have needles stuck in my arm for all kinds of vaccinations against South East Asian diseases. Lucky I'm not squeamish!

With regards to my writing, I am finishing off episode four of the sitcom I mentioned in the previous post with my co-writer tomorrow. Perhaps a sample may surface in the proceeding days, perhaps not. If it doesn't, I'll add a short story.

So it's turning out to be a busy weekend, both writing and with family.

Saturday, I spent near to 10 hours writing my sitcom script. It's coming along really well, with three complete episodes written and half the fourth currently underway. Yesterday was also a particularly big milestone in my so far amateur writing career because I allowed another to assist in co-writing. Suz, who also acts as my editor, sat down with me and went through my ideas and gave her own, before we laughed our way through script writing episode four.

I was actually pleasantly surprised at how much fun it was working with somebody else. There is always apprehension when letting others hear your ideas but Suz shares a similar comedic mindset - I don't know if that's a good or bad thing!

In my private life, on Sunday, I found myself at home with my family, including the newest addition to the family. My 2 week old niece, Emmy is visiting with my brother and his wife. A household of normally four is today occupied by nine people (my other brother and his wife came down too). It fills me with a sense of sadness that this is no longer a normality at my parent's home. Those days are gone but that is life.

Don't get me wrong, this isn't a post dedicated to feelings of sorrow. Despite the change mentioned above, I am still happy that I have a family so close and that we all enjoy the time we spend together.